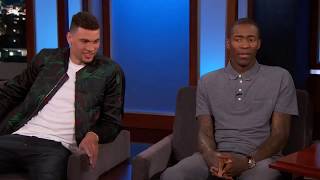 Zach LaVine of the Minnesota Timberwolves and Jamal Crawford of the L.A. Clippers are good friends, so we decided to exploit that friendship by having Zach ask Jamal to appear in a PSA for his charity, which benefits underprivileged kids. So Cousin Sal set up a fake shoot with fake director Thomas Lennon for a fake charity called “Children Without Hoverboards.”

Jamal and NBA Hall of Famer Gary "The Glove" Payton

Crawford With the Nice Pass!

Crawford With The Nice Dime

Crawford Shows off his Jumper!